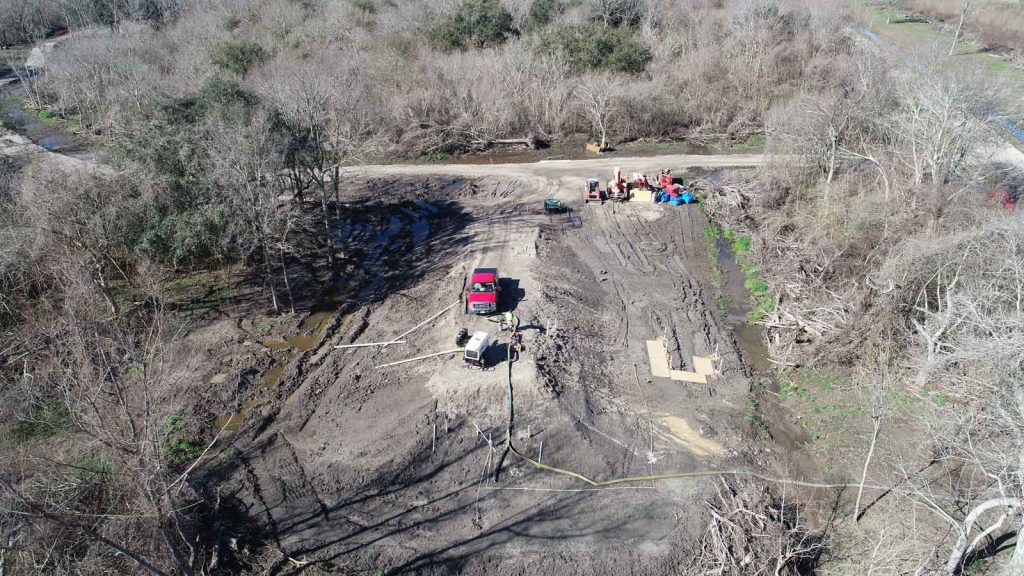 Just downriver from New Orleans, this project could save as much as 47 square miles of land and wetlands from erosion over its first 50 years.

The site is located along the Mississippi River Levee south of New Orleans. Great care had to be taken during the drilling process to ensure the protection of the levee. A significant testing program was critical to the eventual design of the dewatering system for the excavation that was anticipated to extend approximately 50 ft. below river level.

Griffin completed a series of pump tests to design the long-term construction dewatering system for the first (and largest) sediment diversion project undertaken by the CPRA. Then installed a deep well and eight sets of nested piezometers (19 piezometers total) to determine the hydrogeologic characteristics of the lower point bar sand. Additionally, a test eductor system consisting of 11 eductors and three sets of nested piezometers (6 piezometers total) were installed further inland where the lower sand was not prevalent to determine the hydrogeologic
characteristics of the upper point bar silt. At both test sites, a 72-hour pump test was conducted, and a full analysis was provided to AECOM and the AWA team.

Griffin worked closely with AWA and AECOM for over a year to determine the most appropriate testing process. Working closely with the team allowed open dialogue with the CPRA and the USACE, which provided all parties the necessary comfort level before work commenced. The results of the test will allow the design/build team to accurately design a groundwater control system to maintain safe, stable working conditions over the 3-4 year excavation timeline.

READY FOR YOUR PROJECT?