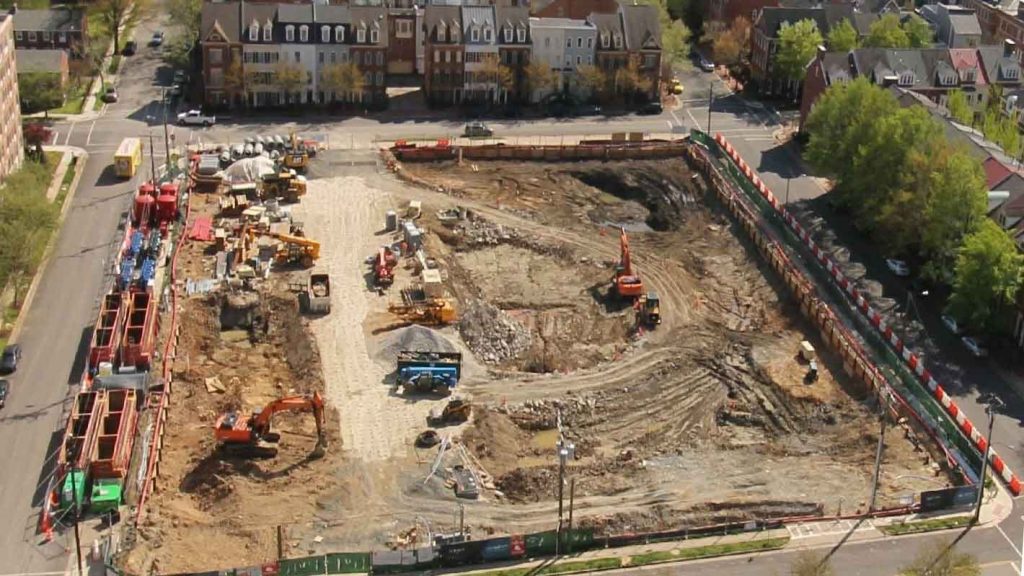 Knowing that the new construction excavation would reach below the existing groundwater table, Trammel Crow teamed with Griffin Dewatering early in the design of the project to develop and implement a comprehensive groundwater control plan.

The Alexan Old Town Project, located in Alexandria, Virginia, was a bus depot used for repairing and maintaining city busses for many years. Trammell Crow Residential is currently developing the property into a multi-family apartment facility.

While there was limited water quality data, after considering the history of the site, Griffin anticipated there would be some groundwater contamination. Having significant experience in this area of Alexandria, Griffin was also aware of the potential for high, naturally occurring iron in the groundwater. The Griffin team developed a preliminary design and estimate based on the past knowledge and experience held by the team.

Griffin then worked with Trammel Crow to develop a test procedure that would provide data needed to refine our dewatering and treatment design. Along with limited water data for the site, Griffin faced a tight schedule. Griffin quickly mobilized to the site to install a test well and piezometers to gain the necessary water quality and flow information to properly design a comprehensive dewatering system.

While the existing structures were being removed, Griffin worked with Trammel Crow to develop the best value dewatering and treatment plan that incorporated construction groundwater control with the safe removal of groundwater contaminants.

The deep well system that was designed had a total of ten deep wells with eight wells around the perimeter of the excavation and two within the excavation. The wells were drilled 60 feet deep with a 30-inch diameter borehole using a bucket-auger. Each well utilized a 5-horsepower submersible turbine pump that was connected to a header pipe that ran along the outside of the excavation perimeter. Griffin also provided two stand-by pumps for the system. The discharge for this system was a total of 1,200 feet and was routed to the treatment system.

Along with the deep well dewatering system, Griffin provided Trammell Crow with a hydraulic submersible package for surface and rainwater to be sump pumped from the site. This package included two submersible pumps and 300 feet of discharge hose.

Griffin designed, installed, and operated a water treatment solution that incorporated oxidation-filtration, sand filters, bag filtration, and adsorptive media. The removal of the iron and manganese required chemicals for oxidation as well as acid and caustic feeds for pH adjustment, with the addition of a flocculant/coagulant.  Multiple sand filters and bag filters were used to remove the oxidized iron, manganese, and total suspended solids (TSS).  Adsorbers with granular activated carbon were installed at the end of the treatment train to remove any volatile organic compounds (VOCs) and oxidants prior to discharge of the processed water to the storm sewer.

Once the dewatering and treatment systems were installed, Griffin helped to manage costs by monitoring the dewatering wells and the treatment system simultaneously. We were able to adjust the dewatering flow to a minimize treatment costs while maintaining a safe, workable site with the required drawdown of the water table. Another cost saving feature was the optimized discharge design in our treatment system. This allowed the clean treated water to be discharged in the storm sewer and the liquid waste from the settling tanks and sand filters were discharged to the sanitary sewer. This maximized the treatment efficiency while limiting costs associated with hauling and disposing contaminants.

Griffin was able to successfully design, install, monitor, and remove the full system while allowing Trammell Crow to meet their excavation and construction requirement within their schedule. Griffin was faced with a tight schedule, limited geotechnical and no water quality data, and a high level of contaminants. We overcame these challenges by using our vast experience, the knowledge of our treatment and design teams, and our superior operations team.

READY FOR YOUR PROJECT?